Home » Nine Weeks in the Falklands

Nine Weeks in the Falklands 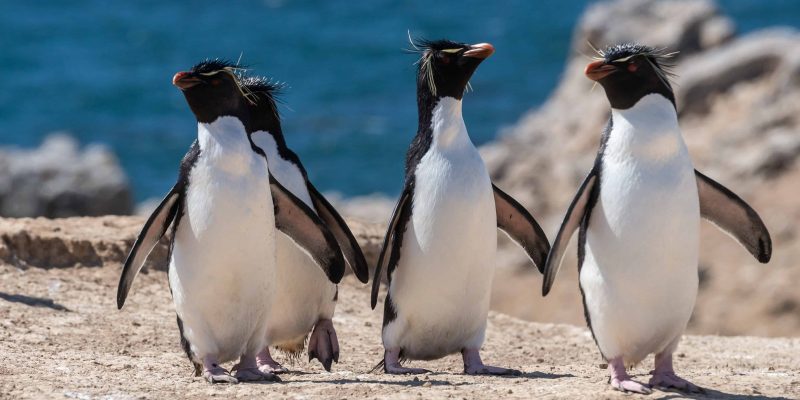 I set off for my nine week post as a Medical Officer in the Falklands at the end of November. I’d never travelled with the RAF before and I went from Brize Norton. There is no long stay parking, so I went with a mate and he drove my car home. Note that if anyone wants to come onto the base they need ID. The flight is quite long- eighteen hours with a break at Ascension Island for re-fuelling. You do end up near the South Pole!

Upon arrival in the Falklands, I was picked up and taken to some temporary accommodation. It was lovely, my own house with a small 9-hole golf course in the garden! I was out there at 7am improving my chip and putt.

The next day was gentle, an induction and show around the hospital. It’s what I’d call in the UK an extended community hospital. It has a GP wing with seven doctor rooms, two nurse rooms and an eye room with slit lamp. There is the main ward with bays and single rooms, twenty four beds. There is an operating theatre and an ITU which is only opened as required. There is also a dental suite/ pathology/ physio/ admin/ X-Ray department and a casualty.

It’s called the King Edward Memorial Hospital or KMH for short. The original wooden building sadly burnt down in 1984 and several patients died. Needless to say the Hospital was rebuilt after then with a modern layout, made from solid block with good fire precautions.

That evening I went along to Scottish dancing at the Town Hall with some of the staff.

The next week I started work in earnest. There are usually five doctors (Medical Officers) and you have to know “un poco de toto”- a little of everything in the bad Spanish I picked up! You have to be a GP also able to ‘step up’ to being a mini physician- when you are on-call you are Houseman and Consultant rolled into one!

We would meet at 08.30am for ward rounds. We’d start with a discussion and the doctor on-call the previous day would present the admission (usually just one). Then we would have a nurse led update on the patients, followed by a push round with the notes trolley. We’d review the patients on the ward and decided what also needed doing. If not on call you would do a GP clinic that started at 9.50am and see about eight patients in fifteen minute slots, and again at 2.30-4.30pm.

On-call is about one in five. On those days you’d just have emergency slots and deal with the day’s problems, usually triaged by a casualty nurse. There was also one surgeon and one anaesthetist who would deal with the surgical side, also you would admit anything surgical and liaise with them.

In casualty I treated conditions from the minor to the more major. Our ‘customers’ fell into three groups. The largest was the ‘Locals’, the Falkland Islanders. There’s about three thousand of them, mainly of British descent, although now there are quite a few Chileans and ‘Saints’, from St. Helena. Then there were the “Tourists”. Holidays from the UK are now popular, with trips to the remote parts of the Island to see penguins, seals, walruses etc. Cruise ships came regularly and on these days up to one thousand extra people arrived from all parts of the world. The third group was the Military. The Army base at MPA is thirty-five miles away. They have two doctors but no X-Ray or theatre, so they sent injuries across as necessary.

I found the work enjoyable but tough. I realized that after twenty years as a GP I had become “stuck in a rut”, and was often just acting as a “sign poster”. In the Falklands, I had to assess, diagnose and arrange the treatment. The hospital knows its limitations, and if we felt a case required it we flew a patient out, either to the UK or to Clinica Alemana, an excellent clinic in Santiago, Chile.

I’ll give an example. A sixty-two year old lady was admitted with a cough, high fever, low blood pressure and dehydration. A flu-like illness and a chest infection was diagnosed and she was treated with IV fluids and IV antibiotics. She remained unwell though with PUO and blood culture showed anaerobic streptococci. After five days on the ward it was apparent that we weren’t winning, so we arranged to transfer her to Clinica Alemana. I went with her in the ambulance for the experience. As we reached the runway the jet touched down- it had flown from Chile to get her. I had a chat with the Chilean doctor and we helped her into the plane. CT scan in Chile showed a pelvic abscess from diverticular disease- they undertook Hartman’s procedure and she was back with a temporary colostomy three weeks later.

Another day we got a call from West Island. A UK botanist has spent the night in a tent and had a nose bleed all night. She felt too weak to walk an hour back to the Land Rover. The RAF helicopter then went and picked her up and brought her into the hospital. I found her hypertensive with normal of Hb 14.6. I treated her blood pressure, plugged her nose and rehydrated her with IV fluids. I kept her in until all settled. Later I saw her in OPD and continued her on treatment for her newly diagnosed hypertension. She was able to finish her holiday and study her plants.

At weekends I enjoyed fishing. The mullet were good sport and good to eat too. There were quiet times too, when I just did jigsaws or read. There was also a pleasant social side, we made friends easily. There were Russian fish scientists and a nice bunch of helicopter guys (British, French and Canadian). I would go round for a meal and I invited them back for some of my own “British cooking”.

Back to the work front. I had one day in the interior. I drove to the small community of Goose Green and did a clinic in someone’s house. I looked at some battlefield sites around there. I found the spot where Colonel H Jones died and paused for a while to pay my respects. The conflict of 1982 is still fairly fresh in people’s minds down there, especially with those who went through it. Their peaceful life was overturned. For a while they were invaded and conquered, and then they experienced the noise of the shell and gunfire which increased as the British approached and recaptured Stanley.

Eventually, my nine weeks were up. It was a well paid job. At the end I had to make sure I had finished all my paperwork and referrals.

Then I flew off to Santiago and finished with a mini-tour of South America. I’ve done Chile, Argentina, Uruguay and Brazil in sixteen days. I missed Christmas but I also missed the British winter. I’ll go home with a suntan and a whole lot of unforgettable memories.

Sign up and keep in touch with all our latest news and information.

We are using cookies to give you the best experience on our website. You can find out more about which cookies we are using or switch them off in settings.

This website uses cookies so that we can provide you with the best user experience possible. Cookie information is stored in your browser and performs functions such as recognising you when you return to our website and helping our team to understand which sections of the website you find most interesting and useful.

Strictly Necessary Cookie should be enabled at all times so that we can save your preferences for cookie settings.

If you disable this cookie, we will not be able to save your preferences. This means that every time you visit this website you will need to enable or disable cookies again.

This website uses Google Analytics to collect anonymous information such as the number of visitors to the site, and the most popular pages.

Please enable Strictly Necessary Cookies first so that we can save your preferences!